‘REMEMBER THIS’ TOUR LAUNCHES THIS SUMMER

Teaming up with NBCUniversal, the band will officially debut the song during the broadcast of the first night of the U.S. Olympic Team Trials for track & field between 10pm-11pm ET on NBC—in advance of the Tokyo Olympics on July 23.

“Remember This” might just be one of their most upbeat, undeniable, and uplifting anthems to date. On the track, guitar echoes as percussive production ramps up towards the expansive and engaging chant, “Used to pray for a moment just like this, there’s a fire in your eyes I can’t resist, baby we’re gonna wanna remember this.”

The band recently joined forces with Marshmello for the song “Leave Before You Love Me,” which is quickly climbing radio charts and is already Top 20 at both Top 40 & Hot AC US radio formats. Watch the music video, which quickly amassed over 10 million views HERE. Whats more, they closed out the Billboard Music Awards—hosted by Nick Jonas—with a show-stopping rendition of “Leave Before You Love Me” and high-energy medley, which included a preview of “Remember This.” Billboard appropriately described it as “Fiery.”

In August, Jonas Brothers embark on the REMEMBER THIS Tour. The 44-date summer tour kicks off August 20th in Las Vegas, NV with country star Kelsea Ballerini as support. REMEMBER THIS Tour tickets are on sale HERE.

This year, the brothers will also release their highly anticipated memoir “Blood” on November 9th, which fans can pre-order HERE.

Jonas Brothers will make this a year to remember. 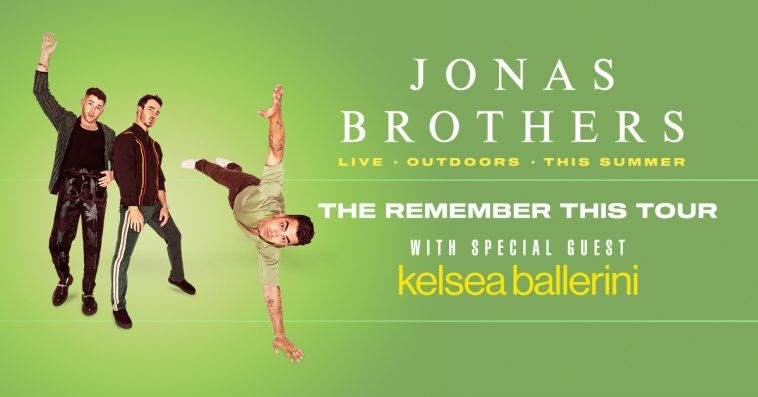 *Kelsea Ballerini not appearing on this date