WITH FESTIVAL APPEARANCE AT

BOTTLEROCK FESTIVAL THIS MAY

“GHOST IN THE CITY (OTOSAN REMIX)” OUT FEBRUARY 8 AND 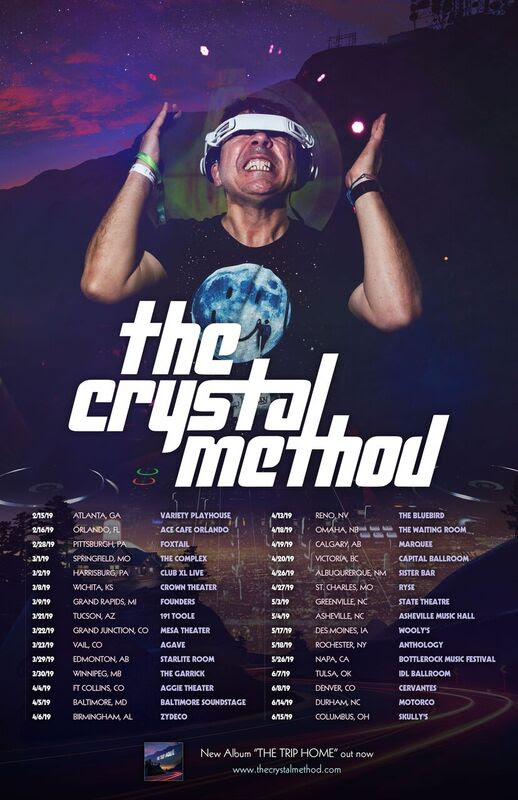 Grammy-nominated electronic music artist THE CRYSTAL METHOD–who is now Scott Kirkland (founding member Ken Jordan went into retirement)-is heading back out on the road in 2019 to support his latest studio album THE TRIP HOME.   Starting mid–February through June, Kirkland will embark on a major DJ tour hitting over 30 tertiary markets in North America.  TCM has also been confirmed to appear at BottleRock Festival this spring. The full range of dates follow below.

Alongside the launch of this year’s shows, THE CRYSTAL METHOD will make available on DSP’s unique remixes of material from THE TRIP HOME.  On February 8, the “Ghost In The City” (Otosan Remix) arrives with “There’s A Difference” (Matt Lange Remix) following on February 15.

Meanwhile on the studio front, The Crystal Method did the theme title and sound design for Guillermo Del Toro‘s Netflix TV animation series “3 Below” which is underway now. SYFY WIRE spoke with executive producer/director Marc Guggenheim about the new installment of the Tales of Arcadia Trilogy, asking him about The Crystal Method:

Music plays a big part of 3Below. Crystal Method created the theme song (see above) but other parts of the sound design too, right?

“In Trollhunters we had to create an area, we had to create Troll Market. With 3Below, we had to create an entire world. A big part of that world was the sound design. The score functions here, not just as a score, but really as another environment. Something that tells you that you’re not just on Arikidion 5, that when you’re back on Earth, you’re amongst Arikidion tech,” replied Guggenheim.  “Between the Crystal Method sound which is very futuristic and synth-y, that works hand and glove, with Jeff Danna’s score, which is that epic sci-fi John Williams-esque score that everyone associates with this kind of material. It wound up being another character in the show. Because of Crystal Method and Jeff’s collaboration, I was thinking a lot more about music on 3Below than I ever did on Trollhunters. That’s a real asset and what helps sets it apart from Trollhunters.”

THE CRYSTAL METHOD’s ‘The Trip Home Tour’ 2019 dates are below. Tickets are available at www.thecrystalmethod.com.