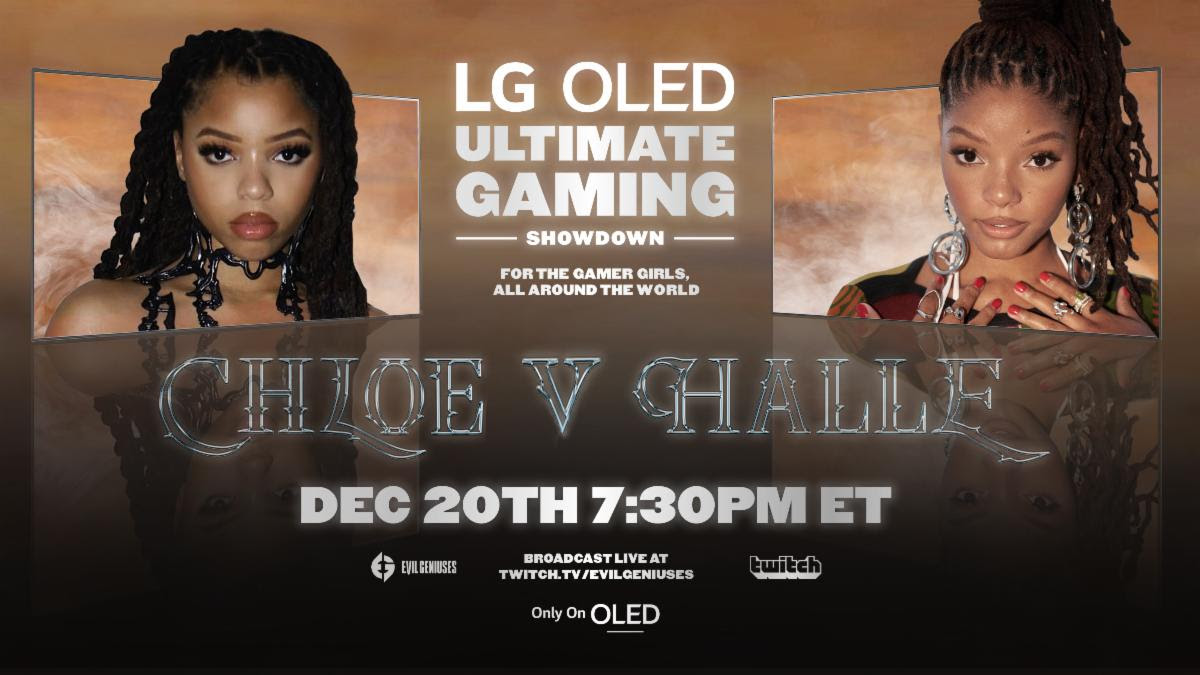 LG Electronics USA announced today the launch of its latest exclusive content series in its Only On OLED campaign, which will feature famed musical sisters Chloe x Halle as they face-off in an exhilarating 90-minute Twitch battle on Monday, December 20th at 7:30 PM ET. During the match-up, the sisters will be joined by Evil Geniuses Creator Collective stars Lisa Wallen and Aruuu.

“We want to encourage women to get involved, learn more, support and take over gaming!” said Chloe.

Now a household name, Chloe x Halle started their R&B career by posting videos to YouTube. The duo was quickly recognized by Beyonce who signed them to her label, Parkwood Entertainment, and became their mentor. During the event, the two sisters will be coached by Evil Geniuses’ TikTok star ARUUU and professional comedian and games streamer Lisa Wallen. Using the sisters’ platform as a boost, LG looks to advocate for women in gaming through this live stream.

“Gaming continues its meteoric rise in popularity and a large part of that growth is among women,” said Peggy Ang, LG’s Senior Vice President of Marketing. “We are excited to partner with the multi-talented Chloe and Halle to advance women in gaming and highlight the power of LG OLED TVs to deliver the ultimate gaming experience.”

Following the gaming competition, LG TV owners will have exclusive access to behind-the-scenes moments, additional content from the gaming showdown, plus the ability to watch it whenever they’d like on LG’s exclusive FOMO Channel app. Future Celebrity Gaming Showdown participants and battles will also be announced.

“We’re excited to partner with LG on this fun program, and know that our fans are as excited as we are to be totally immersed,” said Halle.

The upcoming Chloe and Halle face-off is the second celebrity gaming showdown from LG. Earlier this year, the DJ Khaled and Megan Fox battle attracted more than 1M+ viewers. LG was the first to introduce transformative OLED technology to large screen TVs, and today, more than one million LG OLED TVs have been sold in the United States. Experts worldwide have hailed LG OLED as the best TV technology ever, thanks to its unique ability to create its own light. Only OLED features over 8.2 million self-lit pixels that can be individually controlled, resulting in the deepest black levels, greater detail in darker areas, and rich colors for the most realistic picture quality. For gaming and dynamic sports and movie content, the responsiveness and smoothness of the LG OLED viewing experience is unmatched.

For more information on LG OLED TVs, visit LG.com. Having FOMO about all of the exciting experiences coming from Only on OLED? Visit an LG-authorized retailer to upgrade your home entertainment experience.