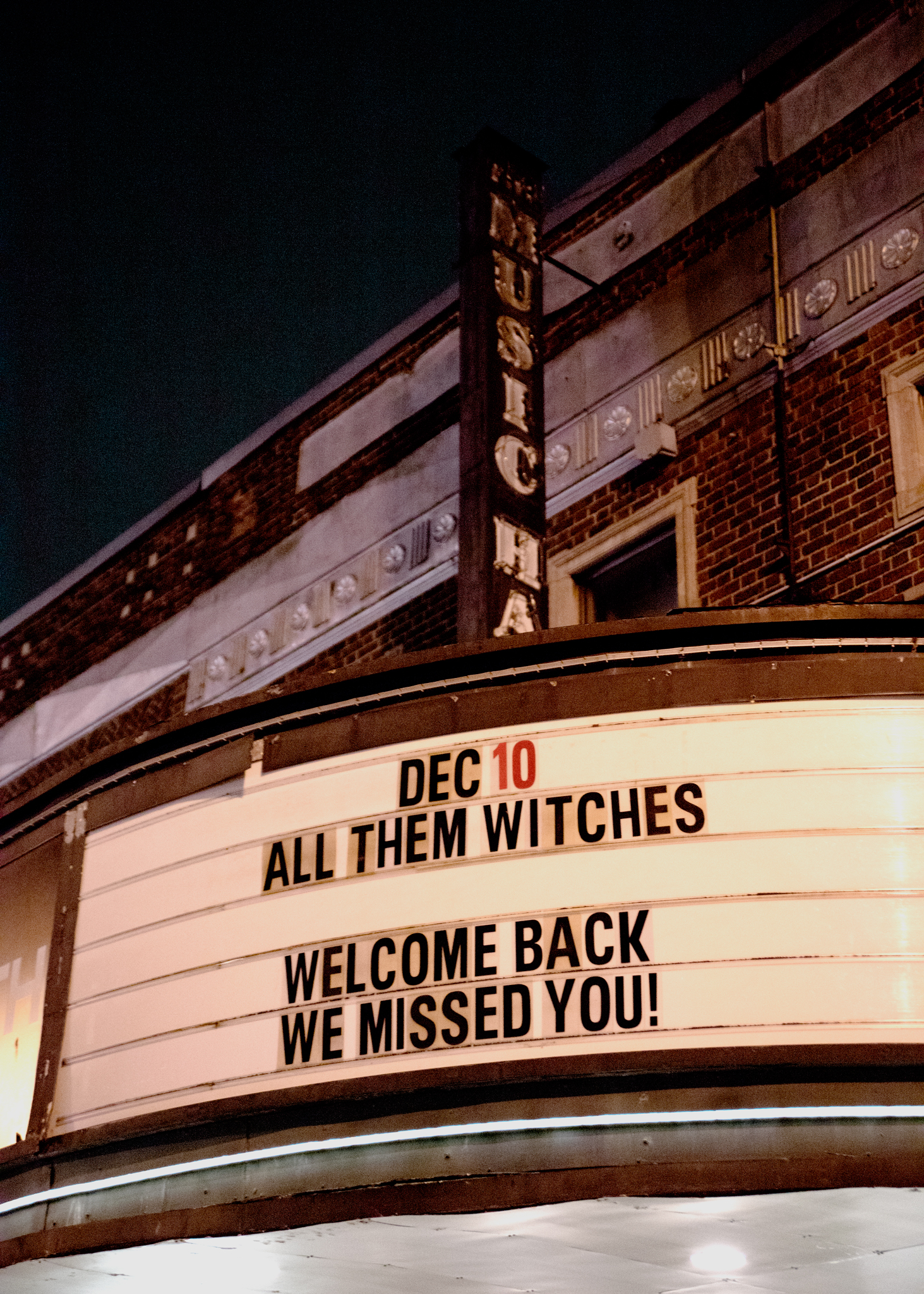 Upon arriving at The Danforth Music Hall for the first time in over two years, I was hit with hope for the future and feeling like life is finally getting back to what it once was, especially for us gig folks. However I was surprised to see that the marquee wasn’t lit up for the night’s show. Was it a technical issue? Or not a hyped enough show to bother lighting it up? I wondered. Admittedly, I had never heard of either of the bands for the night, All Them Witches and LA Witch, but I had no assumptions based on these facts. Entering the venue even 10 minutes before the opening act, the floor was very… open. From there I did assume it was going to be a more relaxed, listening experience type of gig. That was also the impression I got upon giving a brief listen online. All Them Witches are a classic prog rock band with a country flare hailing from Tennessee. LA Witch are a sleepy garage rock band from… I bet you can guess.

LA Witch walked on the stage in the red and blue lights and got right into it. No gimmicks, no flags, no background, no custom outfits, just four ladies who are down for the music. Lead singer and guitarist Sade Sanchez gravels in a positively lazy way that drones you away into the chill zone where time is stretched. The reverb in her mic is very strong adding to the vibe. Their sound is nostalgic, classic rock n roll with a South Western American glam twang. The feeling and images from listening is a cactus, Nevada sun, a Tarantino movie. Sade takes a moment to thank All Them Witches for having them on tour and simple as that, they exit their 45 minute set.

As 9pm rolls around when the headlining act is to approach the stage, a remix of “The Bird is the Word” from Family Guy comes on… an interesting choice. The men in the crowd snicker at this song; of course they would. A cloth background with two monstrous, almost demonic faces rolls down to the stage, lit up in purple, providing a looming vibe. 10 minutes after 9pm, Black Sabbath’s “War Pigs” fires up the crowd so much as if the band themselves came on stage. The men all sing in chorus and I find myself joining quietly to myself. All Them Witches arrive on stage shortly after the chorus of “War Pigs” finishes. Finally the crowd fills up, not quite sold out filled, but a good number.

See more photos of All Them Witches HERE

The band began with a song that had an enchanting violin before breaking out into their forte of heavy, gravelly riffs. As much as I hate to put them into the “dad rock” category, I have to put them there. But these guys are quite good without sounding like they copy and pasted from the rock n roll handbook. This ain’t no Greta Van Fleet bullshit. This is artfully taking a good sound and modernizing it in an authentic way. The guitar solos are long, the drumrolls are plenty, and the keyboard chimes whimsically. They never play anything too high tempo, never touching into punk territory.

They wave up and down between the sleepy, sometimes acoustic songs, and the more bombastic heavy hitters making for a varied, enjoyable show. Their sound has that aura of the sleepy but mysterious town with secrets and if you ask the old guy at the post office for directions, he’ll tell you to make sure you get out of town before night fall; especially when the lead singer Charles Parks says things like “This song from our last record is about two even brothers.” The crowd was well and happy, throwing a teddy bear and rose on stage, throwing up the horns when the long guitar solos were strung, and little puff clouds popping up here and there. In conclusion, this band captures the heart of classic rock lovers who are looking to support a band in the modern times.