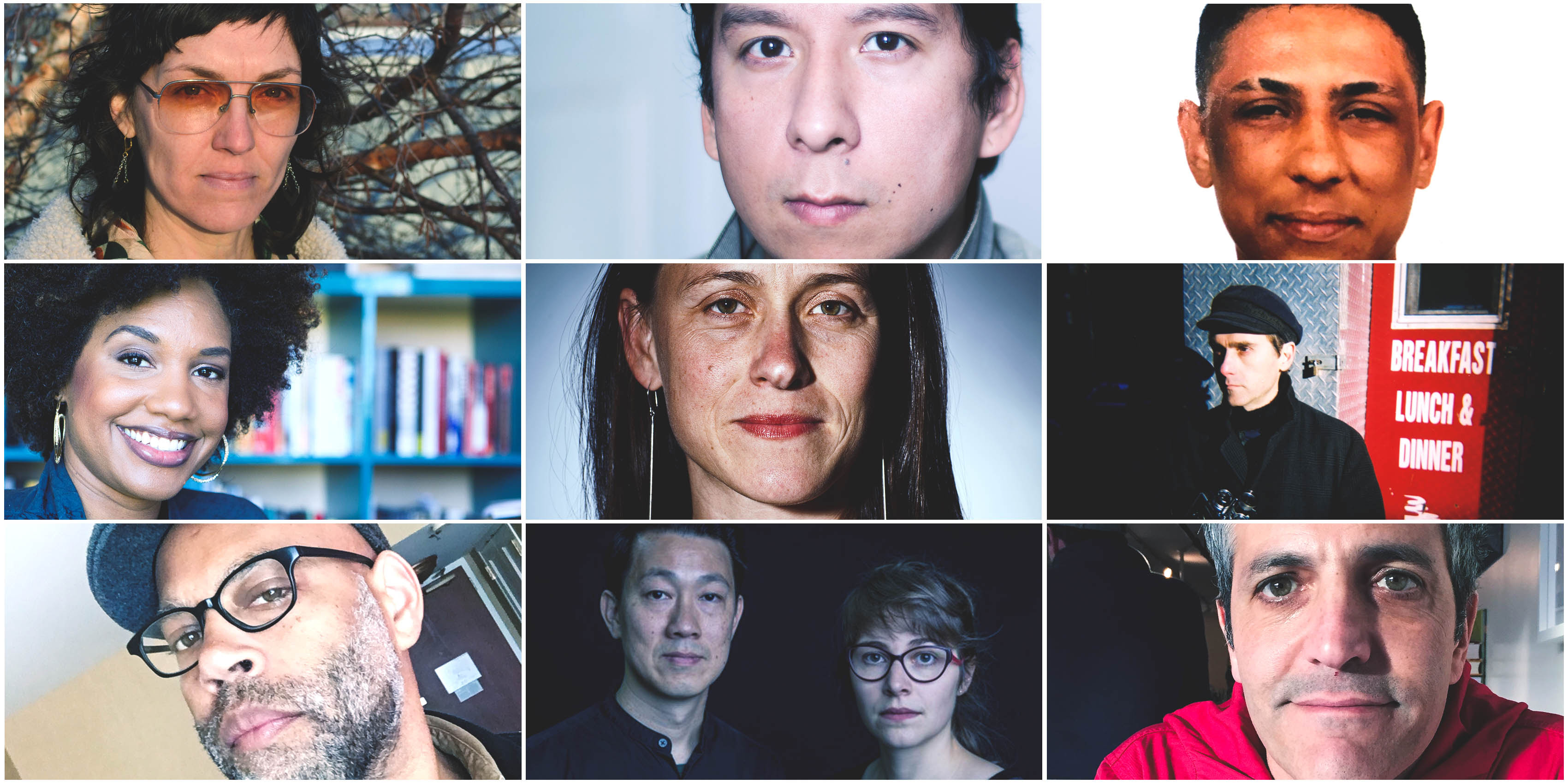 “This year’s cohort reflects our continuing desire to explore the space in between,” said Tabitha Jackson, Director of the Documentary Film Program. “The space between art and film, between photography and moving image, between poetry and social justice, between artist and audience. And who better to lead us into this space of imaginative possibility, and beyond, than this particular group of creative adventurers.”

“Our intention with this program is to provide artist-based support to nonfiction filmmakers operating outside of formal convention, those contributing unique texture to the documentary landscape, ” said John Cardellino, Producer of Art of Nonfiction. “ As funders, we are thrilled to be in dialogue with these artists, to bring them into dialogue with each other, and to continue building a program rooted in the encouragement of uncompromisingly exploring one’s artistic ambitions.”

The Art of Nonfiction Fund provides grants to artists developing work at an early stage that takes an inventive cinematic approach. Once granted, artists have access to a range of Sundance Institute programs and opportunities open only to alumni, as well as ongoing strategic and creative support from the Documentary Film Program. The 2018 Art of Nonfiction Grantees are: Jem Cohen, Kevin Jerome Everson, Kevin B. Lee & Chloé Galibert-Laîné, LaToya Ruby Frazier, and Leilah Weinraub.

Art of Nonfiction is made possible by founding support from Cinereach. Generous additional support is provided by Genuine Article Pictures and Nion McEvoy & Leslie Berriman.

The 2018 Art of Nonfiction Fellows are:

Recipient of the 2012 MacArthur “Genius” Award, Natalia Almada combines artistic expression with social inquiry to make films that are both personal reflections and critical social commentaries. Her work straddles the boundaries of documentary, fiction, and experimental film. Her most recent film Todo lo demás (Everything Else)is a narrative feature starring Academy Award-nominated Adriana Barraza; it premiered at the New York Film Festival and was nominated for a Mexican Academy Award. El Velador (The Night Watchman) premiered at the 2011 Cannes Directors’ Fortnight and broadcast on the award-winning PBS program POV, along with her other two feature documentaries Al otro lado (To The Other Side) and El General (The General). Almada was the recipient of the 2009 Best Documentary Director Award at the Sundance Film Festival and has received fellowships from the Guggenheim Foundation, USA Artists, The Herb Alpert Foundation, and MacDowell Colony. Almada currently lives between Mexico City and San Francisco. More via[link].

Sam Green is an Academy Award-nominated documentary filmmaker based in New York. Green’s recent film A Thousand Thoughts premiered at the 2018 Sundance Film Festival and is a live cinema collaboration with the legendary classical ensemble the Kronos Quartet. His previous film The Love Song of R. Buckminster Fuller features a live score by the indie band Yo La Tengo. An earlier documentary The Weather Underground was nominated for an Oscar, broadcast on PBS, and included in the Whitney Biennial. Green is also a prolific maker of short documentaries, including: The Rainbow Man/John 3:16, lot 63, grave c, Pie Fight ’69(directed with Christian Bruno), N-Judah 5:30, and The Fabulous Stains: Behind the Movie (directed with Sarah Jacobson). He has received grants from the Creative Capital, Rockefeller and Guggenheim Foundations, as well as the National Endowment for the Arts.
Sky Hopinka (Ho-Chunk/Pechanga) was born and raised in Ferndale, Washington and spent a number of years in Palm Springs and Riverside, California, Portland, Oregon, Milwaukee, WI, and is currently based out of Cambridge, Massachusetts.  InPortland he studied and taught chinuk wawa, a language indigenous to the Lower Columbia River Basin. His video work centers around personal positions of Indigenous homeland and landscape, designs of language as containers of culture, and the play between the known and the unknowable. His work has played at various festivals including ImagineNATIVE Media + Arts Festival, Images, Wavelengths, Ann Arbor Film Festival, Sundance, Antimatter, Chicago Underground Film Festival, FLEXfest, and Projections.  His work was a part of the 2016 Wisconsin Triennial and the 2017 Whitney Biennial. He is currently a fellow at the Radcliffe Institute for Advanced Study at Harvard University. More via [link].

The 2018 Art of Nonfiction Grantees are:

Filmmaker/photographer/multi-media artist Jem Cohen‘s feature-length films includeMuseum Hours, Counting, Chain, Benjamin Smoke, Instrument, and World Without End (No Reported Incidents). Shorts include Lost Book Found, Little Flags, and Anne Truitt – Working. His films are often documentary/fiction hybrids – navigating between city symphony, diary film, and essay, they pull things seen on the periphery into the center. Cohen’s work is in the collections of MoMA, the Whitney Museum, Jewish Museum, and D.C.’s Natl Gallery of Art, and has been broadcast by PBS, Arte, and the Sundance Channel. Retrospectives include Harvard Film Archive and London’s Whitechapel Gallery. Grants/Fellowships include Guggenheim, Alpert, Creative Capital, and awards include the Independent Spirit Award (IFP) and Persistence of Vision Award (SFFS). He teaches at The New School and ICP. More via [link].

Kevin B. Lee and Chloé Galibert-Laîné are a team of videographic essayists developing a collaborative practice that combines filmmaking and media research. Their work explores contemporary audiovisual media through online, amateur and found footage contexts in relation to the politics of authority, self- expression, and the histories and theories of cinema. They have presented their works at the Austrian Film Museum, London Essay Film Festival, the Rotterdam International Film Festival, the Ars Electronica Festival and the Impakt Festival. In 2018 they were Artists in Residence at m-cult in Helsinki through the European Media Art Platform (EMAP). Lee, a US-born filmmaker and critic, was the first-ever Artist in Residence of the Harun Farocki Institut in Berlin. He is now Professor of Crossmedia Publishing at the Merz Akademie, Stuttgart. Galibert-Laîné, a French filmmaker and researcher, teaches at Université Paris 8 and is currently writing a PhD at the art-research doctoral program SACRe (École normale supérieure de Paris). More via [link] and[link].

LaToya Ruby Frazier works in photography and video to build visual archives that address industrialism, rustbelt revitalization, environmental justice, health care inequity, family and communal history. Her most recent use of imagery and storytelling that visually represent and advocate justice on behalf of working-class families have appeared in The New Yorker feature-story Georgia’s Separate And Unequal Special-Education System, The New York Times cover story, Why America’s Black Mothers and Babies Are in a Life-or-Death Crisis, and ELLE Magazine special-commission story, Flint Is Family. Frazier is the recipient of many honors and awards including an Honorary Doctorate of Fine Arts from Pratt Institute (2017); the Gordon Parks’ Foundation Award for Photography (2016), fellowships from the John D. and Catherine T. MacArthur Foundation’s MacArthur Fellows Program (2015), TED Fellows (2015), and the John Simon Guggenheim Memorial Foundation (2014). Frazier’s work is represented by Gavin Brown’s enterprise in New York City and Rome.  More via [link].