TICKETS ON SALE NOW
EVAN RACHEL WOOD
TO JOIN AS A SPECIAL GUEST
AT THE SAN DIEGO SHOW SEPTEMBER 28
A BOWIE CELEBRATION: The David Bowie Alumni Tour featuring Mike Garson and fellow key alumni musicians of David Bowie’s bands from across the decades returns this September with a limited run of West Coast tour dates. Commencing September 26 in Ventura, CA, the critically acclaimed show will stop in Riverside, San Diego, Reno and Saratoga. A BOWIE CELEBRATION features band members Mike Garson, Earl Slick, Carmine Rojas and Mark Plati along with world-class vocalists such as Bernard Fowler, Gaby Moreno and Joe Sumner, among others, performing a mix of Bowie’s hits and deep-cuts. See below for tour dates and venues and visit www.abowiecelebration.com to purchase tickets. Watch the show’s trailer here.
Special guest Evan Rachel Wood is set to re-join the all-star band at the San Diego show on September 28. The Emmy and Golden Globe-nominated actress (“Westworld”) and one-half of the electro-pop music group Rebel and A Basketcase sat in earlier this year at the Los Angeles and Atlanta shows to sing a variety of songs and was seen on “The Tonight Show Starring Jimmy Fallon” in April raving about the tour. As Wood explained to Fallon, “It’s not a cover band, it’s the band! It’s the actual band, so when you’re there it sounds as close as you’re going to get to Bowie.” Watch the full segment here. 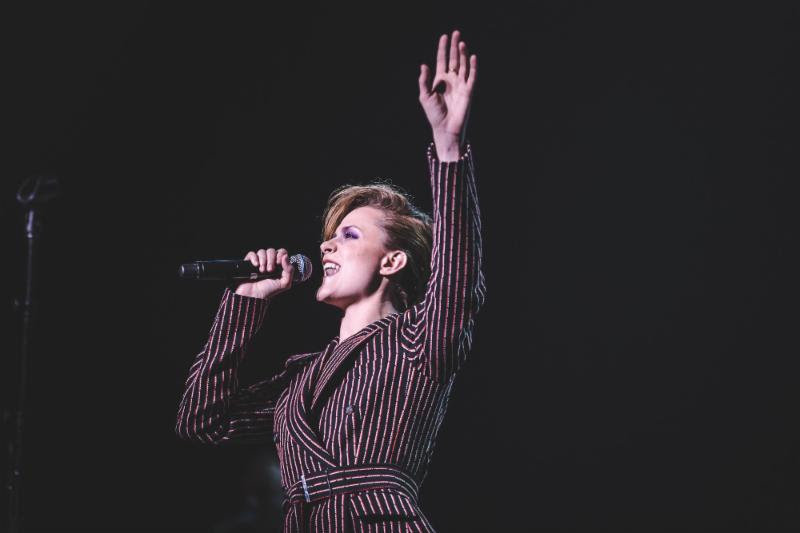 Above: Evan Rachel Wood February 28, 2018 at The Wiltern (Los Angeles, CA)
Photo Credit: Steve Rose
Keyboardist and band leader Mike Garson, the longest-standing member of Bowie’s bands having performed together for both David’s first and last concerts in the United States as well as 1,000 concerts around the globe in between, says: “This is a dream band with each member at the top of their game. Add to that the world’s best fans singing and dancing along with us and the power of David’s music stays alive with the same intent as when we played with him.”
The band features legendary guitarist Earl Slick, who worked on landmark Bowie albums such as Diamond Dogs, Young Americans and Reality; Bowie’s Let’s Dance/Serious Moonlight Tour bassist Carmine Rojas; and Mark Plati, the guitarist and producer who was also a Bowie band member, musical director and producer. Between them, they have over 30 years experience of recording, writing and playing live with Bowie.
The tour received rave reviews throughout its North American run this past February and March with the Atlanta Journal-Constitution noting, “There are no holograms or cheesy replicas; nothing that would sully the memory of his extraordinary catalog. Instead, the show is a loving tribute by musicians who knew Bowie’s quirks and preferences and singers who worship his contributions to music history…This stellar group of players fulfilled fans’ expectations with a set list stocked with favorites and sprinkled with rarities — the best of all scenarios…There is no better homage to be paid to Bowie’s life work than from those who played it best” (Melissa Ruggieri, 3/19/18). Elsewhere, Gary Graff from The Oakland Press in Detroit said, “If anybody’s going to celebrate the late David Bowie, this was the right crew to do it with one special moment after another” (2/20/18) and Jon Bream from the Minneapolis Star Tribune added, “It was a delightful show thanks to an excellent cast and a can’t-miss repertoire” (2/22/18).
Catch A BOWIE CELEBRATION: The David Bowie Alumni Tour in the following cities:
DATE                         CITY                           VENUE
Wed    9/26                Ventura, CA             Majestic Ventura Theater
Thu     9/27                Riverside, CA           Fox Performing Arts Center
Fri       9/28                San Diego, CA         Humphreys Concerts By the Bay
Sat      9/29                Reno, NV                 Silver Legacy Resort Casino
Sun     9/30                Saratoga, CA           The Mountain Winery 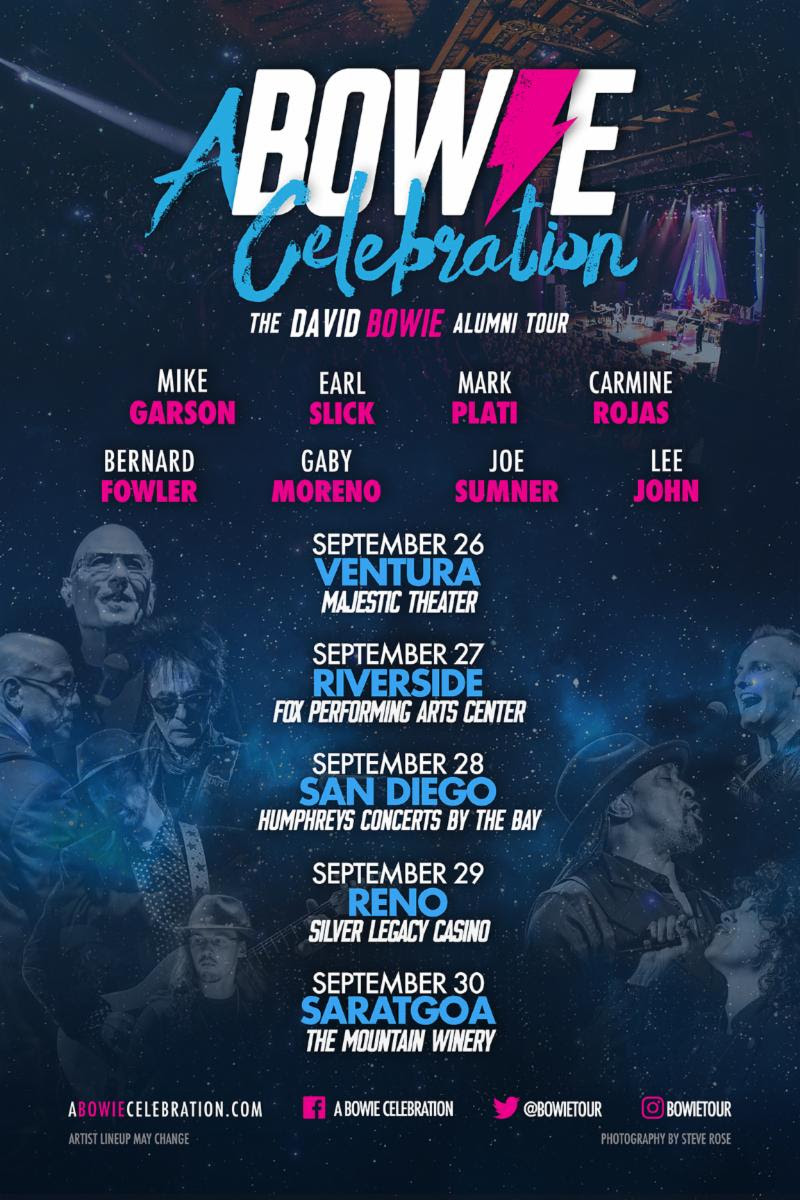