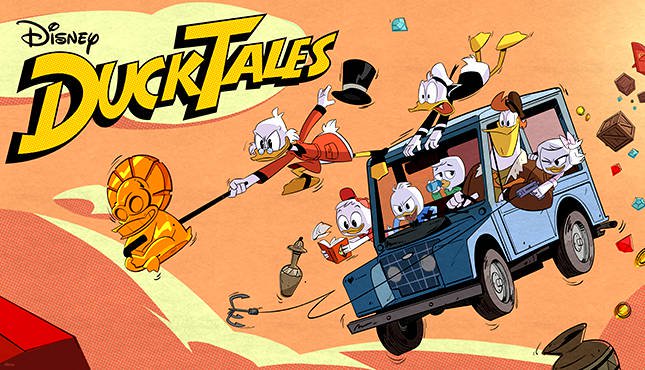 Actress Paget Brewster (“Criminal Minds”) has originated the voice role for Della Duck, who until now has been a rarely seen character, in this morning’s epic one-hour season finale of Disney’s hit series “DuckTales” on Disney Channel and DisneyNOW. Della Duck is the twin sister of Donald Duck and long-lost mother to Huey, Dewey and Louie. She made her first-ever animated onscreen appearance in the series earlier this season on “DuckTales” and was first mentioned in a Donald Duck newspaper comic strip and animated short film in the late 1930s. As daring as her Uncle Scrooge and as stubborn as her brother Donald, Della is a fearless pilot and explorer. As kids, Della and Donald were Scrooge’s original adventure crew, eager to chart the unknown.

Leading up to the finale, the boys discovered the truth behind their mother’s disappearance when Scrooge revealed that Della took his secret rocket ship, got caught in a cosmic storm and became lost in the dark abyss before the triplets were hatched. In the cliffhanger season one finale, a destroyed rocket ship appears on the moon, and, as the screen pans in, Della can be seen longing for her sons while watching a newscast on an old television screen.

One thought on “Paget Brewster becomes Della Duck in Ducktales”