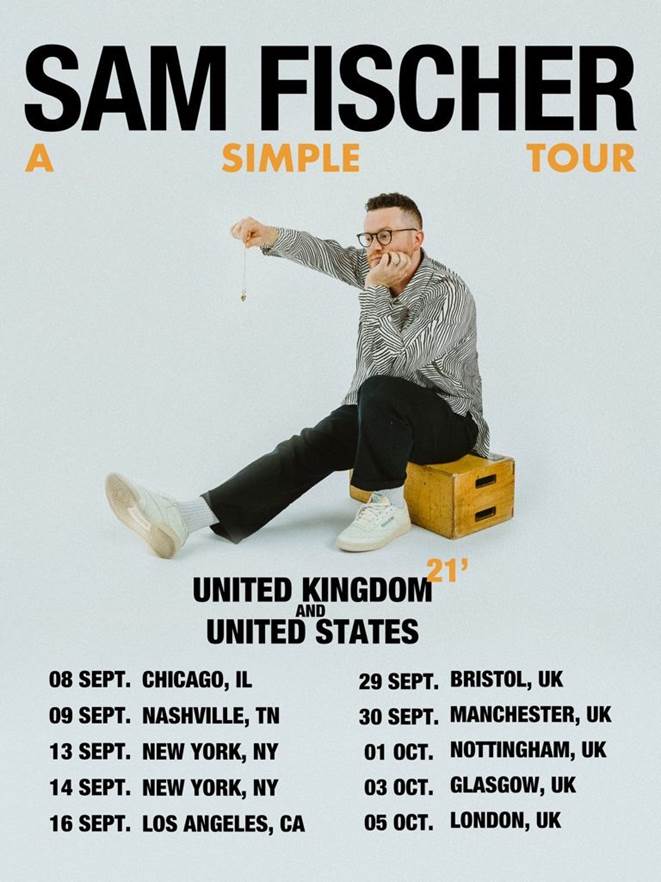 Sam Fischer – the man behind last year’s platinum hit This City and duets with Demi Lovato on What Other People Say and Sam Feldt’s Pick Me Up has announced a string of US and UK tour dates this Autumn.

Sam says: “It’s been a unique journey this past 18 months, having my songs travel further around the world than I’ve been able to and not getting to meet the people who have given me this life I now lead has been a bit heartbreaking, so to be announcing a tour feels surreal, but here we are. The support I’ve had in both the UK & US  has been incredible and I can’t wait to be on stages, doing what I love the most & finally meeting everyone, for the first time.”

Sam’s debut single ‘This City’ is currently sitting on over 500 million worldwide streams and was Top 20 in the UK for 11 weeks. The track has gone double platinum in Australia, platinum in the UK and Gold in the US, New Zealand and Switzerland. He’s also had some incredible US TV performances on Ellen, Jimmy Kimmel and The Late Late Show With James Corden.

Australian born Sam Fischer first introduced himself with his Not A Hobby EP and has garnered incredible attention through his soulful voice and heartfelt lyrics. Touring North America with his friend Lewis Capaldi, he wowed crowds with his buoyant personality and pure love and talent for song-writing. Now based in LA, he not only has received acclaim for his own work, but he continues to solidify his spot as one of the hottest current writers, having worked with global pop superstars including Ciara, Lennon Stella, Louis Tomlinson, Elle King, Jessie J, Virginia To Vegas and many more.

However, it hasn’t all been plain sailing for Sam, who endured his own heartache to achieve his dreams. With the promise of a recording contract in the bag, he set off to LA only for the deal to be pulled away. After months of couch-surfing, he finally and deservedly received his break with This City and project Homework which has been just the amazing start of an exciting new chapter in Sam’s career.