ATLANTA – Fans arrived in Mercedes-Benz Stadium for Atlanta’s 2018 home opener against the Carolina Panthers hoping to see an offensive explosion from the Falcons, and that’s exactly what they got.

The Falcons were both effective and efficient, offensively, in their 31-24 win over the Panthers. Atlanta racked up 428 yards on offense while remaining exceptionally balanced – 256 passing yards and 172 rushing yards. Dan Quinn explained all week how important the run game was in setting up the play-action pass, and he wasn’t kidding.

“I was pleased to see we had balance in our run game and the play-action that goes with that,” Quinn said. “To get the attempts in the run, I thought that was significant.”

More importantly, the Falcons turned those yards into points. The Falcons were a perfect 4-of-4 in the red zone one week after going just 1-of-5 with those opportunities. Atlanta also sustained drives by converting six of its 11 third-down situations.

“Our execution was better than it had been before,” Falcons quarterback Matt Ryan said. “Proud of the way the guys worked all week. When we got our chances we nailed them, across the board today. I thought the execution was great.”

Starting in place of the injured Devonta Freeman, Tevin Coleman once again proved he could shoulder a full load. Coleman carried the ball 16 times for 107 yards – snapping a 21-game streak by Carolina’s defense to not allow a single runner to top 100 yards – and rookie Ito Smith looked like a capable No. 2, gaining 46 yards on his nine carries.

“Teco I thought certainly ran hard,” Quinn said. “And this is an excellent front seven, it’s been difficult to get yards against them. You have to stay with it, you have to keep pounding. We knew there would be some runs for 1s and 0s (yards), but if we kept hitting and kept going, we thought we’d have our opportunities. Tevin, I thought certainly responded with that tonight.” 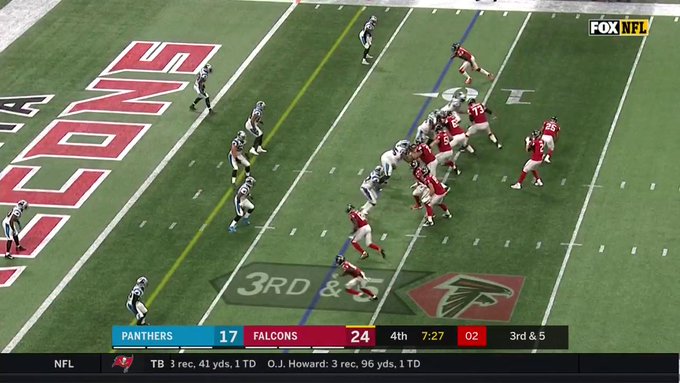 Ryan’s effectiveness didn’t stop there. After a poor performance against the Eagles in Week 1, Ryan looked much more comfortable at home, completing 23 of his 28 passes for 272 yards and another two touchdowns. Ryan did throw an interception on a deep ball to Julio Jones, but his arm looked to be hit as he was releasing the ball.

When he wasn’t being hit, Ryan spread the ball around with ease. Eight Falcons players caught at least one pass, with Jones and rookie Calvin Ridley leading all receivers with 64 yards. Ridley scored the Falcons’ first touchdown of the game on a deft slant route, and Austin Hooper caught Ryan’s second touchdown pass on a corner route at the back right pylon.

“It’s always nice to get everybody involved and kind of distribute the ball, but it depends on what they’re doing,” Ryan said. “And for us, we saw a lot of zone coverage today. And when you see that, you’re going to try and find the pockets in the defense to take advantage of them. The ball kind of got spread around today, and I was proud of the way that when everybody got their opportunity they stepped up and made plays.”

The Falcons may need to replicate such a performance next week with the Saints’ potent offense coming into town, and they’ve now provided a glimpse of what this unit can look like.